1) How long have you been with Theatrikos? What was your first year?
I started my involvement with Theatrikos Theatre Company in the summer of 1983. I had just graduated from NAU and I saw an ad in the paper for auditions for a play called “Close Ties”. I had never auditioned for a play but the director, Bob Haskett included his phone number, so I called him. He encouraged me to audition so I did. Doris Harper-White was helping with auditions and that was the beginning of a very long and close friendship. Everyone was so welcoming, encouraging and kind. I was cast in my first role, and we performed the show at the NAU Creative Arts Theatre. It was the beginning of my 39 years of involvement and throughout those years the theatre has provided me with some of my dearest and closest friends.

2) Theatrikos was founded in 1972. How has Theatrikos changed in that time?
I have served on the Board for many of those years including President, Vice-President, and Secretary. I have volunteered on stage and backstage and have served on many committees including the Artistic Committee. I have seen so many changes over the years. The first major change was getting a permanent building, next was hiring our first employee, a Business Manager. We had relied solely on volunteers for everything up to that point. The next major change was starting a children’s program, Theatrikids. We have been through a lot of ups and downs throughout the years, but thanks to the hardworking volunteers, we have continued to grow and persevere through it all. 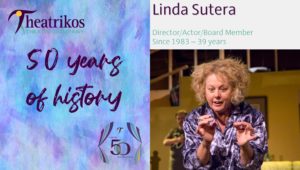