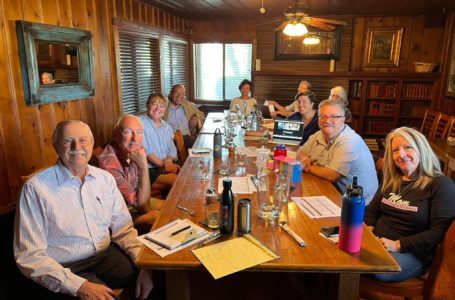 Stan Sutherland moved to Arizona in 2004, when he retired as Deputy General Counsel of S.C. Johnson & Son, Inc. in Racine, Wisconsin. He holds a B.S. (U. of Illinois, 1968) and M.S. (Purdue University, 1972) in physics and a law degree (U. of Michigan, 1975). He served on the board of the Racine Theatre Guild, as president of the Verde Valley Theatre, and as president of the Cottonwood Ranch Homeowners’ Association. He sings tenor in the Master Chorale of Flagstaff, serves on the Flagstaff Arts Council board, chairs the NAU College of Arts and Letters Advisory Council, and is president of the Equestrian Estates Homeowners’ Association. He has acted since 1963, when he starred in a high-school production of Harvey. At Theatrikos he directed Laughing Stock (2010) and Convergence (2013), and has acted most recently in Sherlock Holmes: The Final Adventure (2015), The Gin Game (2016), and Over the River and Through the Woods (2017). A Flagstaff resident since 2009, he has been a member of the Theatrikos Board of Directors since 2010, recently serving as Interim Executive Director. He is also on the Theatrikos Development Committee.

Joe Washington is a Tribal Court Advocate practicing law in the Navajo, Hopi, Yavapai-Apache, and other tribal courts in the area. He was introduced to theater as a freshman at Window Rock High School on the Navajo reservation in a Speech and Drama class. He acted in plays throughout high school and in community theater in Window Rock. A Flagstaff resident since 1976, he has acted in a number of Theatrikos productions. He took a hiatus from the stage to take film acting classes at the Sedona Film School. He had a leading role in the independent comedy More Than Frybread, released in 2011. He returned to stage acting in Theatrikos’ Northern Arizona Playwriting Showcase productions and directed some of those as well.

Carol Covington served for two years as executive director of the Sustainable Economic Development Initiative of Northern Arizona and is currently employed at NAU. She served for four years as volunteer vice chair for the Flagstaff Regional Plan Update Citizen Advisory Committee. She worked in city planning in Northampton and Chicopee, Massachusetts; Blacksburg, Virginia; and Ames, Iowa. An active participant in the community since moving to Flagstaff in 2003, she served on the Flagstaff Clean and Green Committee (now the Sustainability Committee). She joined the Theatrikos board in 2016 after a number of years enjoying being a season ticket holder. “Being active in the community is an important means to be connected to people and place,” she says.

Armando Bernasconi is co-founder, president, and CEO of Quality Connections Inc., a 501(c)3 nonprofit service agency that helps individuals with disabilities become independent and productive by providing them with employment opportunities, job training, and practical life learning programs. He also sits on the executive committee of the Arizona Association of Providers for People with Disabilities, and on the State of Arizona Set-Aside Committee. Born and raised in Guadalupe, Arizona, he has been a resident of Flagstaff since 1994. He joined the Theatrikos board in 2015 and was elected treasurer in 2016. He also serves on the Finance Committee. In high school he acted in Neil Simon’s Rumors. Since attending the Theatrikos production of A Christmas Story, he and his wife have made a date of every opening night.

Terri Brenneman retired in 2004 from State Farm Insurance Company in Bloomington, Illinois, after 33 years primarily working in Health Insurance and Human Resources Benefits Department. She also served on the Police and Fire Commission Board in Normal, Illinois, working with police and fire chiefs to interview applicants. She and her husband first visited Flagstaff about 20 years ago, loved it, and thought about moving here someday. During another visit in 2013 they saw their first Theatrikos play, The Spitfire Grill, which helped them decide to relocate here. They soon became season ticket holders and have been active volunteers ever since. Terri joined the Theatrikos Board in 2018. She has worked backstage for August: Osage County and A Christmas Story, as stage manager on Lost in Yonkers, The Best Christmas Pageant Ever, and Angels In Disguise and as production manager for Rumors and The Great Gatsby.

Lisa, by day, is the Administrative Assistant at Puente de Hózhó Bilingual Elementary School in Flagstaff Unified School District. She helps her community of families with her skills in English and Spanish, along with a few words in Diné/Navajo. At Theatrikos, Lisa has done it all in the last 5 years… She’s wrangled children of all ages as a parent volunteer, a stage manager, and a costume collaborator for numerous theatrical productions. More recently, she has worked for several seasons as the Educational Assistant Director with TheatriKids. She’s also cleaned the bathrooms, manned the concession booth, locked up at day’s end and turned around, seemingly moments later, to open the stage doors bright and early the very next day. Lisa has secured both Mainstage and Theatrikids sponsors and underwriters by the dozens, written key valuable grants, arranged paid private screenings, and even trod the boards herself as both an ensemble cast member and also as a Mainstage headliner a time or two. Thus, it was the great honor of her time at Theatrikos to have been asked recently to join the theatre’s board of directors. She is excited to be able to apply her unique skillset, master’s degree in bilingual multicultural education, and widespread community contacts to the ongoing development, promotion, and enhancement of Theatrikos’ future events and programs.

Sandi is a 30+ year resident of Flagstaff. She developed her love of theatre and Theatrikos through her children who were active members of Theatrikids and have performed in over 20 shows between them.  She craves a “mission” for each show, helping Joe and crew find or obtain props for shows that are truly hard to find. By day she is the local Director of Catholic Charities Community Services and brings to the Theatrikos Board experience in both fundraising and budgeting. She currently oversees more than 15 unique community service programs, each with its own financial statements and budgeting as well as fundraising needs across that organization. She has served as the Board Chair of the City of Flagstaff Housing Authority Board and currently serves on the Board of Housing Solutions of Northern Arizona and the Housing Commission. She is excited to bring her knowledge and experience to help increase awareness of the incredible things Theatrikos is doing to merge the Arts Community with the greater community of Flagstaff.

Bruce is a Professor of Forest Management at Northern Arizona University. Born in Oakland, California, he grew up in the San Francisco Bay Area. He has worked in the forest industry including managing 65,000 acres in South Carolina and as a consultant in leadership, corporate organization, and forestry. His clients have included firms in the forestry and aerospace industries.   He and his wife have lived in Flagstaff since 1985. He served as a member of the Board of Directors of the Flagstaff Leadership Program, has been involved in the United Way, the Citizen’s Police Academy, the City of Flagstaff Open Spaces Commission, and has previously served as a Theatrikos board member. In addition, he acted in the Theatrikos productions of Laughing Stock and It’s a Wonderful Life plus numerous Northern Arizona Playwriting Showcase productions.

Dana is a researcher and educator at NAU and in the Flagstaff community. This native-born Houstonian was introduced to theatre in her early elementary years with her first break-out role at age 10 as Clara in the Nutcracker. With over 15 years experience on the stage and behind the scenes, Danya is a University of Texas Longhorn alumni from the department of Theatre and Dance with a focus on direction and design. After taking a break from the performing arts while traveling the world, Danya is enthusiastic to return to a community of like-minded creatives and artists. Currently, outdoor education and environmental stewardship interest Danya most, so working for Terra BIRDS, a local gardening education nonprofit, is a dream come true. Lastly, Danya has most recently earned her Masters Degree in Sustainable Communities from NAU and hopes to continue growing her roots in Flagstaff while using her 10+ years experience in teaching, mentoring, and logistics to better the community at large.

Kristin has lived in Flagstaff since 1998, moving to attend Northern Arizona University to work on her doctorate in plant ecology. She recently left The Arboretum at Flagstaff where she served for fifteen years as Director of Research and eventually, as Executive Director. During this time, she developed skills in fundraising, grant proposal preparation, and non-profit leadership, which she is now excited to share with Theatrikos. While not a born theater buff, Kris has fond memories of her hometown theater and its diverse productions. Growing up an hour north of Boston, MA, she was able to experience a big city theater district with shows like Little Orphan Annie, Cats, Grease, and the Nutcracker. Kris is looking forward to helping Theatrikos grow and thrive in the greater Flagstaff community.

Sharon Tewksbury-Bloom donated bone marrow twice to two different cancer patients. Other things about Sharon: she can’t do a cartwheel, she’s the only person in the world with her name, and she traveled around the US and Canada for one year, volunteering every week in a different place. The serious stuff: Sharon is an organizational development consultant who specializes in facilitation. With 10 years of experience in public service, Sharon loves to help public servants build relationships and have more productive meetings. Sharon began volunteering at Theatrikos in 2006 as Mrs. Martini in It’s a Wonderful Life. Most recently she served as stage manager for The Legend of Georgia McBride. Sharon is excited for a new role as a Board Member for Theatrikos.

Charlie is a married Flagstaff High School graduate with several children and grandchildren. He’s a member of Shepherd of The Hills Church, where he has served in several capacities including being the President of the Church Council. He’s Vice-Chair of the Executive Board for The Arboretum at Flagstaff, a Northern Arizona Veteran’s Memorial Cemetery Foundation Board Member, a Scout Pack 33 Committee Member and Den Leader, and a Flagstaff Unified School District Foundation Board Member. He also volunteers at the Family Food Center and Golden Rule Charities-The Pantry.

Al White has been on the Board of Directors of Theatrikos on and off since 2006.  He enjoys working to keep the performing arts safe and secure at our 11 W. Cherry address and hopes to serve in other capacities soon.  His history in Flagstaff includes moving here in 1989 and an interest in local business and government as a Council representative and business owner.  Happily retired now, he wishes only to help new leadership avoid the mistakes of the past!