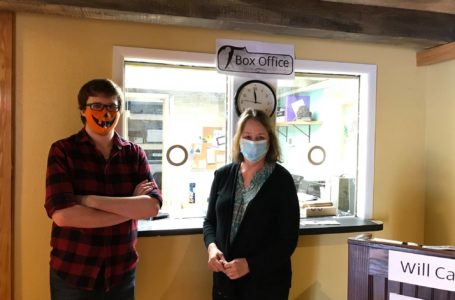 Chris Verrill brings to Theatrikos more than 30 years of experience in the nonprofit worlds of theatre, the arts, education, and broadcasting. He has produced, written, directed, and/or acted in more than 100 stage, television, and radio shows; totaling over 2,000 performances. Prior to joining Theatrikos in 2019, he was executive director of Beijing Playhouse, the English-language theatre in China. He has produced and hosted educational programs, and done the marketing-fundraising-accounting tasks, for a dozen TV and radio stations, most recently for KIXE/PBS in Northern California. When he was 11, his grandparents took him to see the Broadway production of The Music Man starring Dick Van Dyke, and he hasn’t looked back since. “I’m one of the few people who enjoys both the artistic and business sides of theatre,” Chris says. He’s enjoying helping to build on and advance Theatrikos’ half-century of great theatre. Chris welcomes your phone calls and emails! 928-774-1662

Joe has been the Education Director since April of 2010. During that time, he has worked with hundreds of students of all ages to help create and craft over 30 productions. In addition to being nominated for the Viola Award in Arts Education for the past three years, in 2016, Joe was honored to have won the Arizona Governor’s Award for Arts Educator. Joe feels very blessed to be on the ultimate dramatic journey with his supportive family and faithful friends. Joe welcomes your phone calls and emails! 928-774-1662

Larry is a Professor Emeritus of Criminology and Criminal Justice at NAU and was previously a Marine and a law enforcement officer. After a career in law enforcement, Larry graduated from Louisiana State University with a Doctorate in Sociology and minors in Criminal Justice and Experimental Statistics. Larry has been a lifelong wood worker and currently owns ClearWood Cabinets of Flagstaff.  He has been associated with Theatrikos off and on since working on his first set for “Proof” in 2007.

Casey was born and raised in Flagstaff and graduated from NAU in the spring of 2021. He was part of Theatrikids when he was younger and went on to be a theatre minor at NAU. In 2022, he played the role of Ellard in The Foreigner which was his very first mainstage performance at Theatrikos. Casey has a passion for theatre and acting, hoping one day to become a professional voice actor.

Our brand new Box Office Associate, Laura, is excited to be working at Theatrikos!

Our brand new Bookkeeper, Kimberly, is excited to be working at Theatrikos!