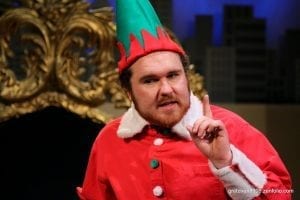 Enjoy a staged performance of David Sedaris’ irreverent monologue about a department store elf who laments the indignities he faces at his seasonal job in “The Santaland Diaries,” performed Dec. 20-22 at the Doris Harper-White Playhouse in historic downtown Flagstaff.

Join Crumpet the Elf, played by Scott Ballou, for a hilarious behind-the-scenes tour of Macy’s Department Store’s Santaland, complete with the best and worst of human nature—but mostly the worst. The production contains mild adult content that may not be appropriate for younger or more sensitive patrons.

Not only does Crumpet recount the times he was cursed at, shamed, and otherwise humiliated, but he tells his story while wearing his elf uniform. Adorned with pointy slippers, tights, Lederhosen, and an elf hat, Crumpet laments his situation while making the audience double over with laughter.

“Flagstaff audiences have heard Sedaris’ classic tale each year on KNAU, but until they’ve seen Crumpet in the flesh, they don’t really comprehend the genius of this story,” said Daggett. “This show has become a Flagstaff favorite and everyone is invited to the party.”

Alcohol is available both before and DURING the show with a bar set up onstage.

Performances will begin at 7:30 p.m. Dec. 20-22 with beer and wine available for purchase “cabaret style” before and during the show. Individual tickets are $15 for adults and $12 for seniors and students and can be purchased online; by calling (928) 774-1662; or by visiting the theater’s Box Office, which is open from noon to 6 p.m. Mondays, Wednesdays, Fridays and two hours prior to each performance.