1. How long have you been with Theatrikos? What was your first year?
I started at Theatrikos in 1992 with the May/June production of Laura, so I have been involved with Theatrikos for 30 years.

2. How has Theatrikos changed in that time?
When I started with Theatrikos, it was almost akin to a repertory company: we had four mainstage shows, no studio shows, and no TheatriKids, so all three categories have either changed or been added to the slate of seasonal offerings.

3. What does Theatrikos mean to the Flagstaff community?
If it wasn’t for Theatrikos, I wouldn’t have maintained my connection with Flagstaff for as long as I have. I moved here for the M.A. in English with an Emphasis in Creative Writing at NAU, then adjunct for two years in the English department, a time during which I became a member of Theatrikos. It introduced me to the community of Flagstaff, and the people who live here unaffiliated with the university. In a nutshell, that is how I see Theatrikos – a theatre that quite literally serves the community, and one in which it is easy to create contacts and friendships and become a part of a wider network. 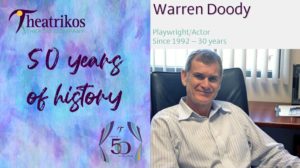