Theatrikos’ ‘The Foreigner’: Meeting serious issues head on with humor

Check out the original article here 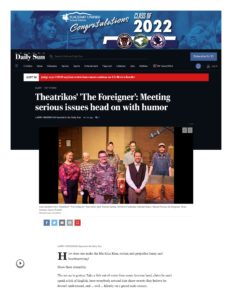 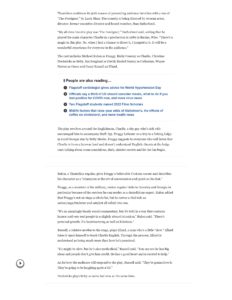 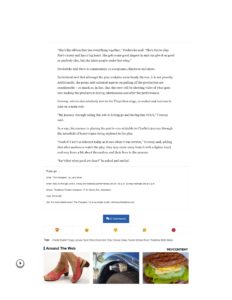 LARRY HENDRICKS Special to the Daily Sun
How does one make the Klu Klux Klan, racism and prejudice funny and
heartwarming? Show their absurdity.

The set-up is genius: Take a fish out of water from some faraway land, claim he can’t
speak a lick of English, have everybody around him share secrets they believe he
doesn’t understand, and well hilarity on a grand scale ensues.

Theatrikos continues its 50th season of presenting audience favorites with a run of
“The Foreigner,” by Larry Shue. The comedy is being directed by veteran actor,
director, former executive director and board member, Stan Sutherland.
“My all-time favorite play was ‘The Foreigner,’” Sutherland said, adding that he
played the main character Charlie in a production in 1989 in Racine, Wisc. “There’s a
magic in this play. So, when I had a chance to direct it, I jumped at it. It will be a
wonderful experience for everyone in the audience.”

The play revolves around the Englishman, Charlie, a shy guy who’s sick wife
encouraged him to accompany Staff. Sgt. Froggy LeSueur on a trip to a fishing lodge
in rural Georgia run by Betty Meeks. Froggy suggests to everyone who will listen that
Charlie is from a faraway land and doesn’t understand English. Guests at the lodge
start talking about some scandalous, dark, sinister secrets and let the fun begin.

Rulon, a Theatrikos regular, gives Froggy a believable Cockney accent and describes
his character as a “champion at the art of conversation and quick on his feet.”
Froggy, as a member of the military, makes regular visits to America and Georgia in
particular because of the services he can render as a demolitions expert. Rulon added
that Froggy’s not on stage a whole lot, but he serves a vital role as savior/sage/trickster and catalyst all rolled into one. “It’s an amazingly timely social commentary, but it’s told in a way that contains
humor and very real people in a slightly absurd situation,” Rulon said. “There’s personal growth. It’s heartwarming as well as hilarious.”

Russell, a relative newbie to the stage, plays Ellard, a man who’s a little “slow.” Ellard
takes it upon himself to teach Charlie English. Through the process, Ellard is understood as being much more than how he’s perceived. “He might be slow, but he’s also methodical,” Russell said. “You can see he has big ideas and people don’t give him credit. He has a good heart and is excited to help.” As for how the audience will respond to the play, Russell said, “They’re gonna love it. They’re going to be laughing quite a bit.”

Fredericks plays Betty as naive but wise at the same time. “She’s the ribbon that ties everything together,” Fredericks said. “She’s fun to play.She’s ornery and has a big heart. She gets some good zingers in and can give it as good as anybody else, but she takes people under her wing.”
Fredericks said there is commentary on acceptance, kindness and more.

Sutherland said that although the play contains some heady themes, it is not preachy.
Additionally, the props and technical aspects on pulling off the production are
considerable – so much so, in fact, that the crew will be showing video of what goes
into making the production during intermission and after the performance.

Conway, who is also relatively new to the Theatrikos stage, is excited and nervous to
take on a main role. “My journey through taking this role is letting go and having fun with it,” Conway said. In a way, his journey in playing the part is very relatable to Charlie’s journey through
the minefield of heavy topics being explored in the play. “Gosh if it isn’t as relevant today as it was when it was written,” Conway said, adding that after audiences watch the play, they may come away from it with a lighter heart and may learn a bit about themselves and their lives in the process. “Isn’t that what good art does?” he asked and smiled.