Flex passes for our 2019 season are now available through our box office during open hours: MWF noon to 6 p.m. and two hours prior to showtimes. Call 928-774-1662, email the box office, or visit in person to get yours! 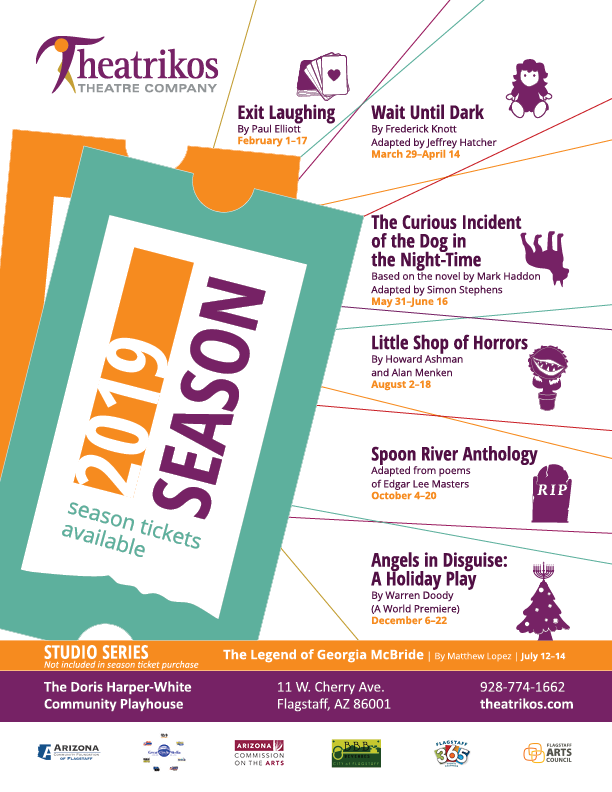 A weekly bridge night with the girls takes an unfortunate turn when one in the foursome inconveniently dies. But the longtime friends from Birmingham transform it into the wildest and most exciting night of their lives when they “borrow” the ashes from the funeral home for one last card game.

A blind housewife unwittingly comes to possess a doll filled with heroin, which a brutal criminal and two small-time thugs want to get their hands on. A deadly game of cat and mouse ensues in this masterful thriller that plays on the themes of darkness and light.

The Curious Incident of the Dog in the Night-Time
based on the novel by Mark Haddon, adapted by Simon Stephens
May 31 to June 16
Directed by Scott Ballou and Dani Knight

Fifteen-year-old Christopher has a unique mind that is phenomenal at math but ill-equipped for everyday life. When he discovers his neighbor’s dog speared to death with a garden fork, Christopher finds himself under suspicion. His work to solve the murder mystery takes him on a thrilling journey that upturns his world.

When a drag show comes to town, Elvis impersonator Casey, trades in his role as “The King” to become an all-out queen with the help of some new friends who become the second family he never saw coming. The Legend of Georgia McBride takes us on a delightful journey of self-discovery through song, spectacle, and sequins!

This delectable sci-fi horror musical with an electrifying score tells of a meek and dejected flower shop assistant who happens upon a strange plant, which he affectionately names after his crush at the shop. Little does he know this unusual plant will develop a soulful R&B voice, a potty mouth, and an unquenchable thirst for human blood, and ultimately, for world domination.

In this beautifully haunting play, the former residents of Spoon River examine life and the longing for what might have been. Reflecting on their dreams, secrets, and regrets, they paint a gritty and honest portrait of the town as all of their pasts are illuminated.

It’s Christmas Eve, and the Freckletons are about to celebrate their tenth Christmas in southern California. A relatively routine holiday celebration turns into utter chaos in this modern, comedic, and family-friendly spin on “the Christmas play,” weaving in social media, romance, the solstice, Hanukkah, and the need to put our differences aside to fully appreciate the gift of the holiday season.