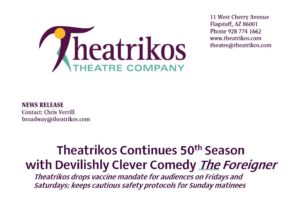 FLAGSTAFF, Arizona. (April 20, 2022) Theatrikos, founded in 1972, continues the 50th anniversary season with one of the most popular and ingenious comedies of the stage. Theatrikos surveyed Northern Arizona audiences and asked, of all the shows we’ve done over the past 50 years, which shows they most want to see again. The Foreigner came in near the top of the list. You ask and we deliver. This third show of Theatrikos’ 50th anniversary season runs May 20 to June 5, 2022.

The Foreigner: When everyone in the lodge thinks that a stranger doesn’t understand a word of English, some devious characters speak freely around him and he learns some dark secrets. A hilarious comedy based on a devilishly clever idea.

“In my 60 year love affair with theatre, I’ve been involved with many plays—performing, directing, and working backstage and in the booth. But The Foreigner has a special place in my heart,” said director Stan Sutherland. “Back in 1989, at the Racine Theatre Guild, I was thrilled to be cast as Charlie in The Foreigner. The script brings out aspects of people I hadn’t seen before, and everyone in the cast was inspired by its rich humor and its poignant messages about the potential of every individual and the evil and stupidity of prejudice. The show will be magical and hilarious for audiences in Flagstaff.”

This week, Broadway League dropped their vaccine mandate for audiences. At Monday’s meeting, Theatrikos’ board of directors decided to follow their lead. Effective with The Foreigner, Theatrikos will no longer require vaccination for audience on Friday and Saturday night performances.

“Safety of our cast and crew and audience and our Flagstaff community is always our priority,” said Theatrikos Executive Director Chris Verrill. “We’re not out of this yet. Hopefully the latest Omicron subvariant stays at bay. My thanks to all of our patrons for their patience with these perpetually changing safety protocols.”

Performances of The Foreigner are at Theatrikos, May 20 to June 5, 2022, Fridays and Saturdays at 7:30 pm and Sundays at 2 pm. The usual opening night reception has been canceled due to safety protocols. Tickets can be purchased online at theatrikos.com, by calling 928 774 1662, or by visiting the theatre’s box office, which is open from noon to 6 pm Mondays, Wednesdays, and Fridays and two hours prior to each performance.

For 50 years, Theatrikos Theatre Company, an award-winning non-profit theatre embracing the spirit of Broadway, has been one of Northern Arizona’s leading arts organizations. Located in the Doris Harper-White Playhouse, at 11 W Cherry Ave in historic downtown Flagstaff, the theatre proudly offers nearly 70 performances of musicals and plays annually.