2) Theatrikos was founded in 1972. How has Theatrikos changed in that time?
Theatrikos has grown considerably since that time. Originally, the theater relied on a core group to stage its plays, and many of those people stayed for years. In recent years, there’s been more fluidity, but there is also more opportunity for newcomers and vets alike. 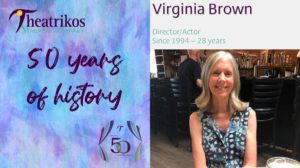